Hydrogen is seen as the replacement for fossil fuels and is therefore part of the energy transition. Hydrogen can be produced ‘green’ and can also absorb peaks and troughs in the production of green energy. This not only contributes to the sustainability of transport, but is also part of and solution to the challenges that the energy transition entails. In the Netherlands you could already use hydrogen in Helmond, Rhoon and Arnhem. Now also in Delfzijl!

iTanks Partner Groningen Seaports contributed to the realization of this hydrogen filling station in the Netherlands ….

To make the use of hydrogen buses in the North Netherlands region possible, PitPoint built a fuel station next to the Chemie Park Delfzijl. Thanks to an innovative pipeline, built by Groningen Seaports, green hydrogen, which is produced at the AkzoNobel Specialty Chemicals chlorine plant, is transported to the petrol station. This sustainable hydrogen can make a major contribution to the reduction of particulate matter and CO2 emissions from road traffic.

Greening economy
In addition to hydrogen as fuel for buses, possibly trains and other heavy transport, hydrogen also offers good opportunities for the greening of the economy. By large-scale production of green hydrogen it can be used in energy and chemistry. The challenge in the Northern Netherlands is to produce green hydrogen from sustainable sources and to transport it to the companies in order to make chemistry and mobility greener. Together with other companies in the port area of Eems Delta, AkzoNobel and Gasunie are investigating the possibilities to expand the production of green hydrogen production, starting with a hydrogen generating plant (20 MW water electrolysis). The opening of the fuel station is also a start for further development of green hydrogen in the area of mobility and greening of our northern economy. 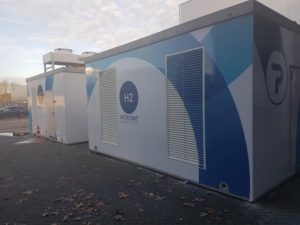