The smoke-free welding torch Extractor, developed by iTanks in collaboration with TNO and Translas, is a hit in Canada. Canada-based companies National Steel Car and Brandt have made the choice to work with the Extractor from now on. Why? Read the cases;

Case | National Steel Car
National Steel Car is located in Hamilton, Ontario – Canada. They have more than 100 years of experience in the field of engineering and commitment to quality. NSC has built a reputation as the largest manufacturer of freight cars in North America. They employ more than 1500 welders.

The challenge
National Steel Car has adopted a new contract for the construction of a stainless steel train set. They have a separate building to build this train with little ventilation. Because the parts with which National works are very large, working under a bonnet or other methods for collecting dust is not feasible. A large ventilation system for roof fans was considered to remove some of the visible dust, but this created a noisy environment and resulted in significant heat loss during the cold Canadian winters.

The solution
Technicians from RoboVent (partner of Translas) first evaluated the work area to determine the needs. This application has eight 95 welders with a total area of ​​124 ‘x 365’ and a 40 ‘high ceiling. The large space required the Extractor Fume Gun source pickup capability for each welder, along with the Vista360 environmental channel without air extractor with strain relief that clears the remaining 5-15% of the particles from the ambient air. Partner RoboVent is currently installing (95) Extractor Fume Guns by Translas, (43) ProCube extraction units and (15) Vista360 Ductless Ambient units where the air is re-inflated at the factory. This saves energy and protects employees. National Steel Car has been working with RoboVent and Translas for more than a year to develop a welding fume extraction gun that works for them and that they can standardize to get ahead.

The challenge
Brandt is very brand conscious and has the drive to stay ahead of the competition and to keep their production facilities clean. They did extensive research to upgrade all their welders and facilities for the removal of vapors. This was new and they looked at different ideas from large fan systems for rooffans or welding helmets, but they could not make anything with their welding of different sizes and store layouts. They also encounter significant heat loss during the cold Canadian winters with their current traditional installation.

The solution
Brandt contacted RoboVent (partner of Translas) for a better solution. Technicians first evaluated the work area to determine the needs. Brandt has been working for more than a year with RoboVent and Translas on the development of a welding smoke extraction welding gun that works for them and that they can standardize to get ahead. This is rolled out in phases. Phase 1 is currently being installed. There are (8) different buildings we work on and every welder in each building has a RoboVent Extractor Fume Gun from Translas connected to a ProCube extraction unit. 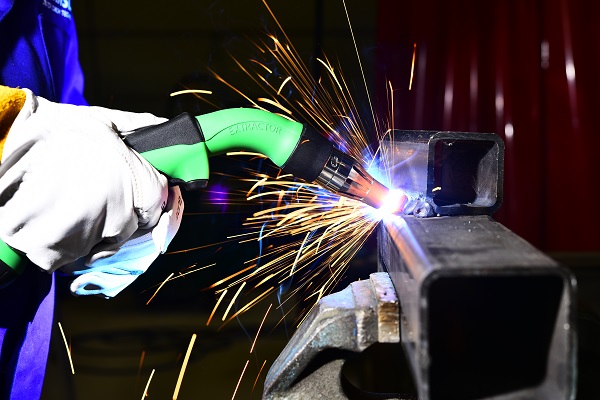